A specially created odor delivery device, along with machine learning-based analysis of scalp-recorded electroencephalogram, has enabled researchers at the University of Tokyo to see when and where odors are processed in the brain. The study found that odor information in the brain is unrelated to perception during the early stages of being processed, but when perception later occurred, unpleasant odors were processed more quickly than pleasant odors. Problems with odor perception can be an early symptom of neurodegenerative diseases, so uncovering more of the neural bases of odor perception could help towards better understanding of those diseases in the future.

Does the smell of a warm cup of coffee help you start your day the right way? Or can you not stand the strong, heady stuff? According to new research, how quickly your brain processes the smell of your morning beverage might depend on whether you think that odor is pleasant or not.

A team at the University of Tokyo created a special device that can deliver 10 diverse odors in a way that is accurate and timely. The odors were administered to participants who rated their pleasantness while wearing noninvasive scalp-recorded electroencephalogram (EEG) caps, which record signals inside the brain. The team was then able to process the EEG data using machine learning-based computer analysis, to see when and where the range of odors was processed in the brain with high temporal resolution for the first time.

“We were surprised that we could detect signals from presented odors from very early EEG responses, as quickly as 100 milliseconds after odor onset, suggesting that representation of odor information in the brain occurs rapidly,” said doctoral student Mugihiko Kato from the Graduate School of Agricultural and Life Sciences at the University of Tokyo.

Detection of odor by the brain occurred before the odor was consciously perceived by the participant, which didn’t happen until several hundred milliseconds later. “Our study showed that different aspects of perception, in particular odor pleasantness, unpleasantness and quality, emerged through different spatial and temporal cortical processing,” said Kato.

“The representation of unpleasantness in the brain emerged earlier than pleasantness and perceived quality,” said Project Associate Professor Masako Okamoto, also from the Graduate School of Agricultural and Life Sciences. When unpleasant odors (such as rotten and rancid smells) were administered, participants’ brains could differentiate them from neutral or pleasant odors as early as 300 milliseconds after onset. However, representation of pleasant odors (such as floral and fruity smells) in the brain didn’t occur until 500 milliseconds onwards, around the same time as when the quality of the odor was also represented. From 600-850 milliseconds after odor onset, significant areas of the brain involved in emotional, semantic (language) and memory processing then became most involved. 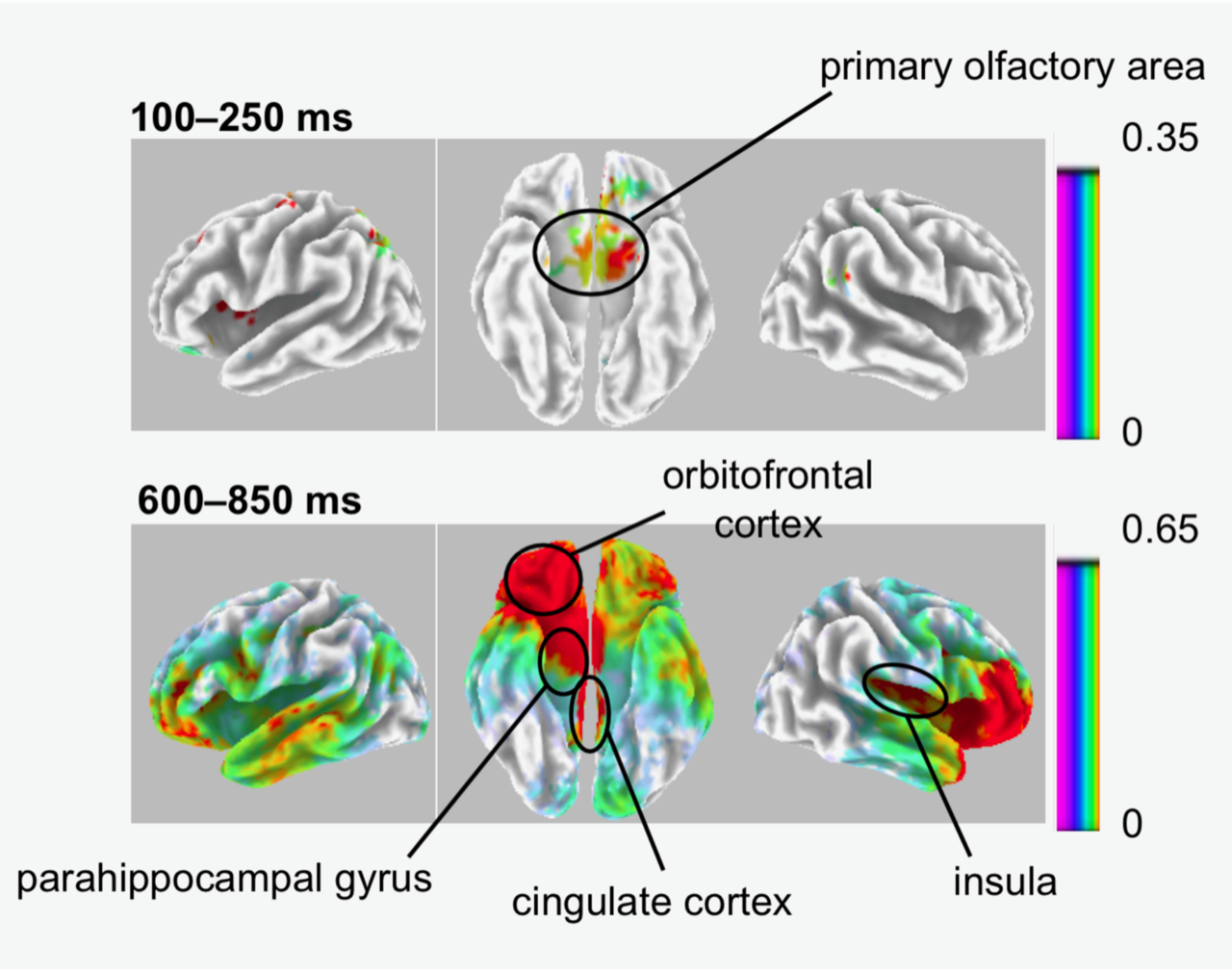 Images of smells being processed in the brain. EEG readings enabled the research team to record which parts of the brain processed the odors. ©Mugihiko Kato

The earlier perception of unpleasant odors may be an early warning system against potential dangers. “The way each sensory system recruits the central nervous system differs across the sensory modalities (smell, light, sound, taste, pressure and temperature). Elucidating when and where in the brain olfactory (smell) perception emerges helps us to understand how the olfactory system works,” said Okamoto. “We also feel that our study has broader methodological implications. For example, it was not known that scalp-recorded EEG would allow us to assess representation of odors from time periods as early as 100 milliseconds.”

This high temporal resolution imaging of how our brains process odors may be a stepping stone towards better understanding the mechanisms of neurodegenerative diseases in the future, such as Parkinson’s and Alzheimer’s diseases, in which a dysfunction in the sense of smell is an early warning sign. The team is interested in exploring several further research avenues. “In our daily life, odors are perceived along with other sensory information like vision, and each sense influences the perception of the other,” said Kato. “Although we presented olfactory stimuli alone in the current study, we think that analyzing brain activity under more natural conditions, such as presenting odors with a movie, is important.” Perhaps Smell-O-Vision might yet make a comeback?

Source: The University of Tokyo