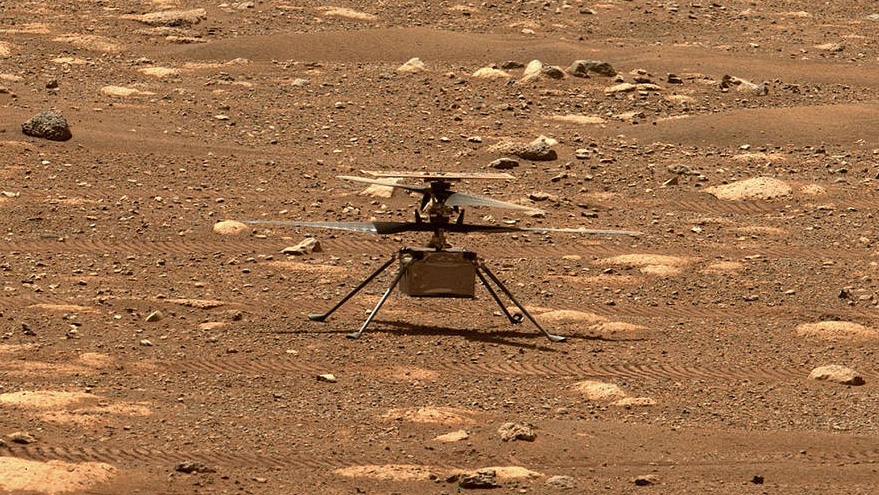 The Ingenuity Mars Helicopter’s black-and-white navigation camera has provided dramatic video of its record-breaking 25th flight, which took place on April 8. Covering a distance of 2,310 feet (704 meters) at a speed of 12 mph (5.5 meters per second), it was the Red Planet rotorcraft’s longest and fastest flight to date. (Ingenuity is currently preparing for its 29th flight.)

“For our record-breaking flight, Ingenuity’s downward-looking navigation camera provided us with a breathtaking sense of what it would feel like gliding 33 feet above the surface of Mars at 12 miles per hour,” said Ingenuity team lead Teddy Tzanetos of NASA’s Jet Propulsion Laboratory in Southern California.

The first frame of the video clip begins about one second into the flight. After reaching an altitude of 33 feet (10 meters), the helicopter heads southwest, accelerating to its maximum speed in less than three seconds. The rotorcraft first flies over a group of sand ripples then, about halfway through the video, several rock fields. Finally, relatively flat and featureless terrain appears below, providing a good landing spot. The video of the 161.3-second flight was speeded up approximately five times, reducing it to less than 35 seconds.

The navigation camera has been programmed to deactivate whenever the rotorcraft is within 3 feet (1 meter) of the surface. This helps ensure any dust kicked up during takeoff and landing won’t interfere with the navigation system as it tracks features on the ground.

Ingenuity’s flights are autonomous. “Pilots” at JPL plan them and send commands to the Perseverance Mars rover, which then relays those commands to the helicopter. During a flight, onboard sensors – the navigation camera, an inertial measurement unit, and a laser range finder – provide real-time data to Ingenuity’s navigation processor and main flight computer, which guide the helicopter in flight. This enables Ingenuity to react to the landscape while carrying out its commands.