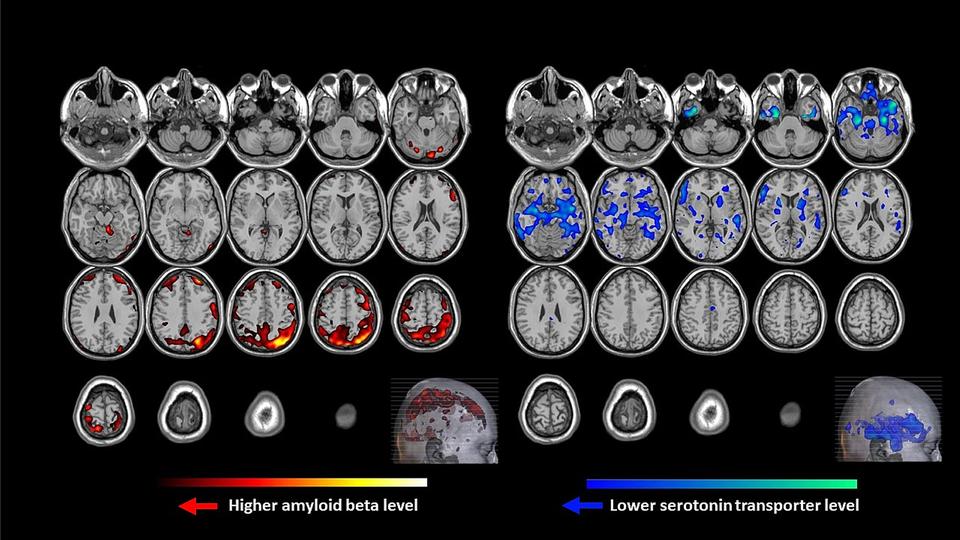 Looking for ways to image the human brain for the earliest signs of aging and cognitive decline, Johns Hopkins Medicine researchers recently identified a pattern that links the accumulation of amyloid beta (Aβ) proteins (associated with cognitive decline later in life) with a reduction of serotonin, the brain chemical that improves mood. The pattern—seen with a mathematical algorithm using data collected from positron emission tomography (PET) scans in older adults—may help predict if a person is likely to develop depression later in life.

The researchers say their findings, published in Translational Psychiatry, suggest that the more a person expresses this pattern, the more severe the depression might be.

“What’s unique about PET scans is that they enable us to look at chemicals localized in the living brain in relation to Aβ proteins associated with memory loss,” says Gwenn Smith, Ph.D., Richman Professor of Alzheimer’s and Related Dementias in the Department of Psychiatry and Behavioral Sciences at the Johns Hopkins University School of Medicine. “This was fundamental for our work because we were able to test hypotheses from past research on mice with dementia for our imaging study in the human brain.”

Late-life depression, one of the most common psychiatric disorders among older people, refers to a major depressive episode—in some cases for the first time. According to the American Geriatrics Society’s Health in Aging Foundation, between 1% and 2% of American adults over age 65 have major depression—with more women than men reporting they are depressed. However, the society suggests that the numbers may actually be higher because older adults are less likely than younger people to admit, or even realize, they are depressed. Late-life depression is associated with greater risk for cognitive decline.

For their study, the researchers analyzed data collected from 40 participants over age 60 who were evenly split between men and women. Of the participants, 20 were unmedicated and were experiencing late-life depression without bipolar or psychotic symptoms. Their data were compared with those from a control group of 20 healthy, nondepressed older adults.

All participants had a series of screenings, including physical and neurological examinations, laboratory and toxicology testing, and psychiatric and neuropsychological evaluations. They also were given a standard Mini-Mental State Exam—a test used to identify cognitive impairment—as well as a psychiatric interview.

In a series of tests using radiotracers—short-acting radioactive molecules that “light up” in a PET scan—the researchers looked at both sets of participants for the amounts of Aβ and serotonin transporter (5-HTT), a protein that regulates the amount of serotonin in nerve cells.

The data collected from the PET scans were then analyzed using a mathematical formula that identified a pattern showing how Aβ accumulation relates to 5-HTT.

The pattern, Smith says, was significantly higher in the late-life depression group, indicating that a decrease in 5-HTT is linked to higher levels of Aβ in different areas of the brain—and in turn, to depression.

The researchers also examined the relationship between the mathematically derived pattern and the severity of depression. For all study participants, the more that the decreased serotonin/increased Aβ pattern was seen, the greater were the depressive symptoms.

Lower serotonin levels, say the researchers, were previously linked to depression. Therefore, selective serotonin reuptake inhibitors—antidepressants that increase the amount of the brain chemical to a more normal level—have been prescribed for treatment of major depressive disorders, anxiety disorders and other psychological conditions.

“Our work reinforces the role of serotonin in late-life depression and the proteins associated with memory loss,” says Smith.

Smith says further research is needed to understand how these findings can best be applied to help people with depression. “Our aim is to use this as a diagnostic tool to predict who will respond best to antidepressants and who may be at risk for memory decline,” she says.