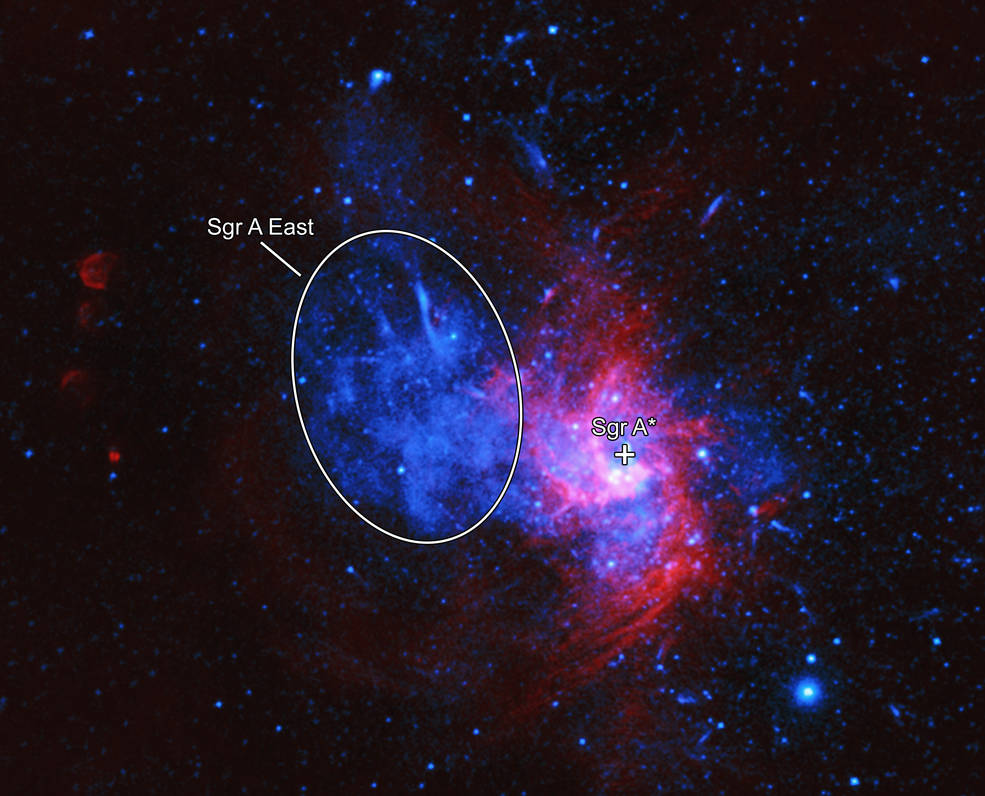 Astronomers may have found our galaxy’s first example of an unusual kind of stellar explosion. This discovery, made with NASA’s Chandra X-ray Observatory, adds to the understanding of how some stars shatter and seed the universe with elements critical for life on Earth.

This intriguing object, located near the center of the Milky Way, is a supernova remnant called Sagittarius A East, or Sgr A East for short. Based on Chandra data, astronomers previously classified the object as the remains of a massive star that exploded as a supernova, one of many kinds of exploded stars that scientists have catalogued.

Using longer Chandra observations, a team of astronomers has now instead concluded that the object is left over from a different type of supernova. It is the explosion of a white dwarf, a shrunken stellar ember from a fuel-depleted star like our Sun. When a white dwarf pulls too much material from a companion star or merges with another white dwarf, the white dwarf is destroyed, accompanied by a stunning flash of light.

Astronomers use these “Type Ia supernovae” because most of them mete out almost the same amount of light every time no matter where they are located. This allows scientists to use them to accurately measure distances across space and study the expansion of the universe.

Data from Chandra have revealed that Sgr A East, however, did not come from an ordinary Type Ia. Instead, it appears that it belongs to a special group of supernovae that produce different relative amounts of elements than traditional Type Ias do, and less powerful explosions. This subset is referred to as “Type Iax,” a potentially important member of the supernova family.

“While we’ve found Type Iax supernovae in other galaxies, we haven’t identified evidence for one in the Milky Way until now,” said Ping Zhou of Nanjing University in China, who led the new study while at the University of Amsterdam. “This discovery is important for getting a handle of the myriad ways white dwarfs explode.”

The explosions of white dwarfs is one of the most important sources in the universe of elements like iron, nickel, and chromium. The only place that scientists know these elements can be created is inside the nuclear furnace of stars or when they explode.

“This result shows us the diversity of types and causes of white dwarf explosions, and the different ways that they make these essential elements,” said co-author Shing-Chi Leung of Caltech in Pasadena, California. “If we’re right about the identity of this supernova’s remains, it would be the nearest known example to Earth.”

Astronomers are still debating the cause of Type Iax supernova explosions, but the leading theory is that they involve thermonuclear reactions that travel much more slowly through the star than in Type Ia supernovae. This relatively slow walk of the blast leads to weaker explosions and, hence, different amounts of elements produced in the explosion. It is also possible that part of the white dwarf is left behind.

Sgr A East is located very close to Sagittarius A*, the supermassive black hole in the center of our Milky Way galaxy, and likely intersects with the disk of material surrounding the black hole. The team was able to use Chandra observations targeting the supermassive black hole and the region around it for a total of about 35 days to study Sgr A East and find the unusual pattern of elements in the X-ray data. The Chandra results agree with computer models predicting a white dwarf that has undergone slow-moving nuclear reactions, making it a strong candidate for a Type Iax supernova remnant.

“This supernova remnant is in the background of many Chandra images of our galaxy’s supermassive black hole taken over the last 20 years,” said Zhiyuan Li, also of Nanjing University. “We finally may have worked out what this object is and how it came to be.”

Along with the suggestion that Sgr A East is the remnant from the collapse of a massive star, previous studies have also pointed out that a normal Type Ia supernova had not been ruled out. The latest study conducted with this deep Chandra data argue against both the massive star and the normal Type Ia interpretations.

These results have been published today in The Astrophysical Journal, and a preprint is available online. The other co-authors of the paper are Ken’ichi Nomoto of The University of Tokyo in Japan, Jacco Vink of the University of Amsterdam in The Netherlands, and Yang Chen, also of Nanjing University.