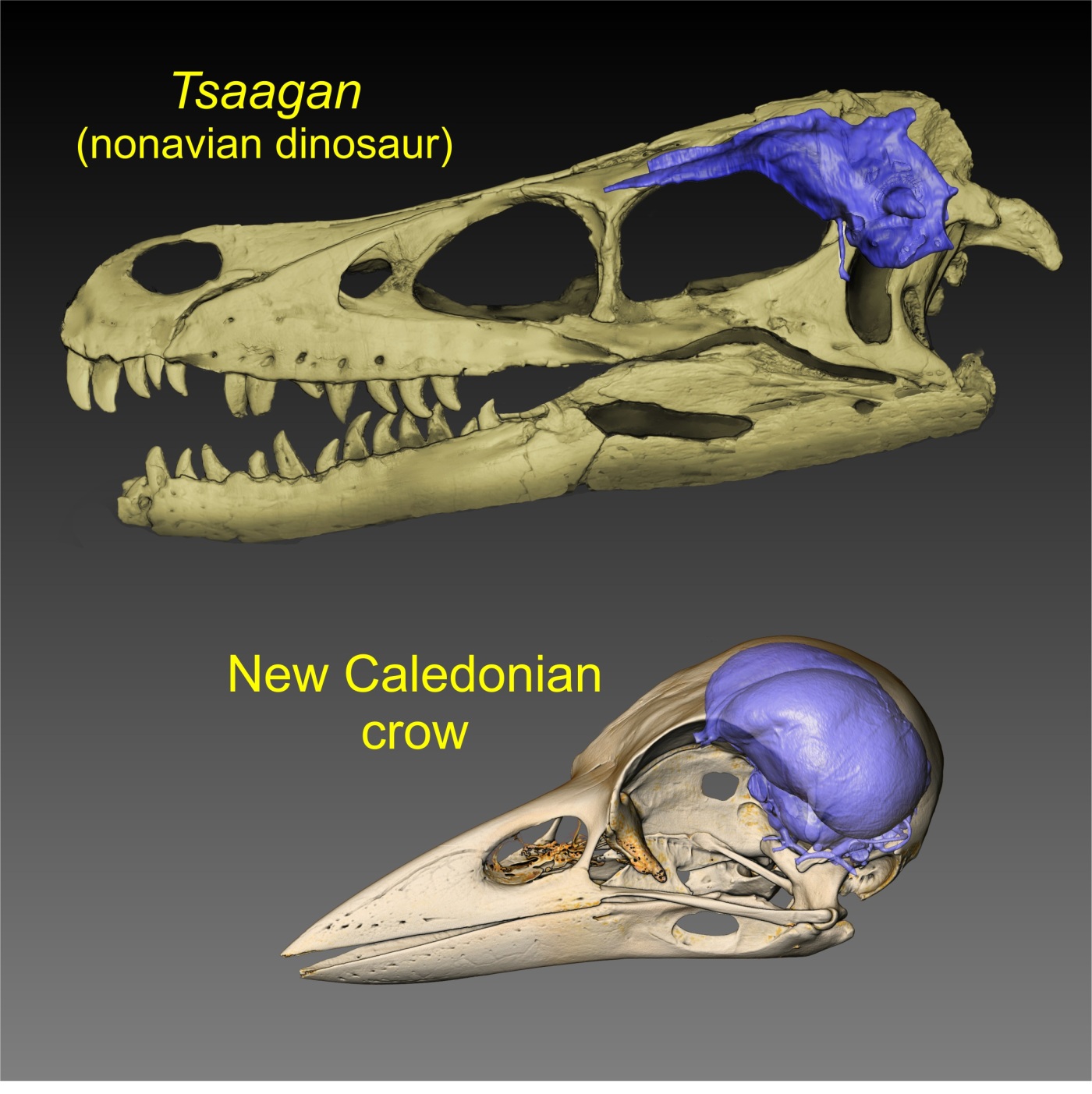 An international team of evolutionary biologists and paleontologists have reconstructed the evolution of the avian brain using a massive dataset of brain volumes from dinosaurs, extinct birds like Archaeopteryx and the Great Auk, and modern birds.

The study, published online in the journal Current Biology, reveals that prior to the mass extinction at the end of the Cretaceous Period, birds and non-avian dinosaurs had similar relative brain sizes. After the extinction, the brain-body scaling relationship shifted dramatically as some types of birds underwent an explosive radiation to re-occupy ecological space vacated by extinct groups.

“One of the big surprises was that selection for small body size turns out to be a major factor in the evolution of large-brained birds,” says Dr. Daniel Ksepka, Curator of Science at the Bruce Museum and lead author of the study. “Many successful bird families evolved proportionally large brains by shrinking down to smaller body sizes while their brain sizes stayed close to those of their larger-bodied ancestors.”

In order to understand how bird brains changed, a team of 37 scientists used CT scan data to create endocasts (models of the brain based on the shape of the skull cavity) of hundreds of birds and dinosaurs, which they combined with a large existing database of brain measurements from modern birds. They then analyzed brain-body allometry: the way brain size scales with body size.

“There is no clear line between the brains of advanced dinosaurs and primitive birds,” notes co-author Dr. Amy Balanoff of Johns Hopkins University. “Birds like emus and pigeons have the same brains sizes you would expect for a theropod dinosaur of the same body size, and in fact some species like moa have smaller-than-expected brains.”

The two groups of birds with truly exceptional brain sizes evolved relatively recently: parrots and corvids (crows, ravens, and kin). These birds show tremendous cognitive capacity, including the ability to use tools and language, and to remember human faces. The new study finds that parrots and crows exhibited very high rates of brain evolution that may have helped them achieve such high proportional brain sizes.

“Several groups of birds show above average rates of brain and body size evolution,” remarks co-author Dr. N. Adam Smith of the Campbell Geology Museum at Clemson University. “But crows are really off the charts — they outpaced all other birds. Our results suggest that calling someone ‘bird-brained’ is actually quite a compliment!”

“Crows are the hominins of the bird kingdom,” says co-author Dr. Jeroen Smaers of Stony Brook University. “Like our own ancestors, they evolved proportionally massive brains by increasing both their body size and brain size at the same time, with the brain size increase happening even more rapidly.”