Universe’s Expansion May Not Be The Same In All Directions 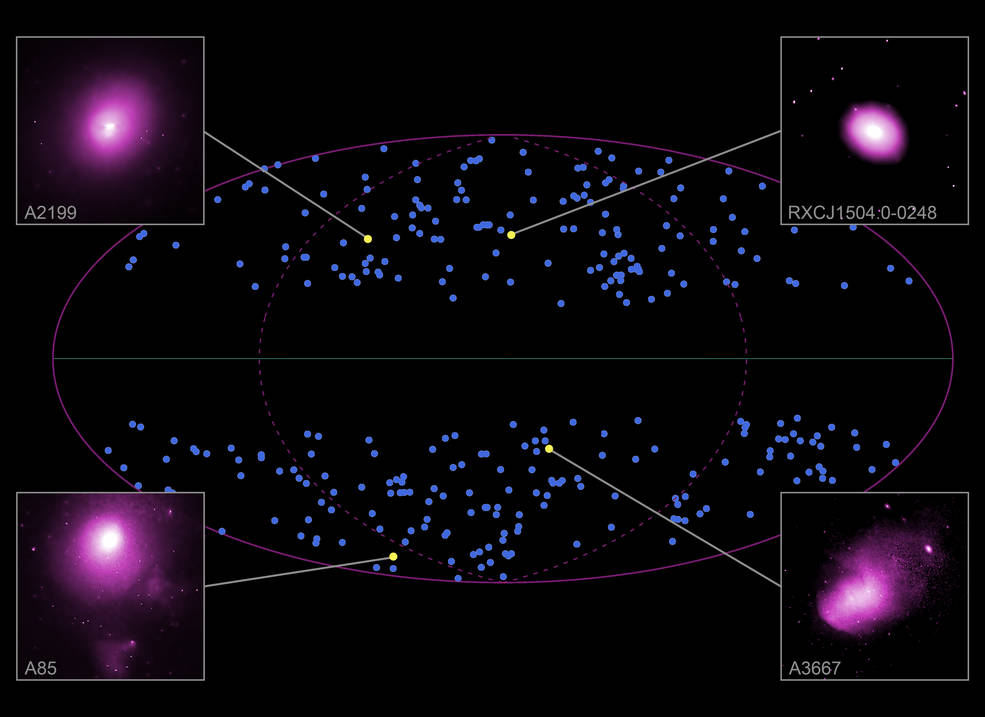 One of the fundamental ideas of cosmology is that everything looks the same in all directions if you look over large enough distances. A new study using data from NASA’s Chandra X-ray Observatory and ESA’s XMM-Newton is challenging that basic notion.

Astronomers using X-ray data from these orbiting observatories studied hundreds of galaxy clusters, the largest structures in the universe held together by gravity, and how their apparent properties differ across the sky.

“One of the pillars of cosmology – the study of the history and fate of the entire universe – is that the universe is ‘isotropic,’ meaning the same in all directions,” said Konstantinos Migkas of the University of Bonn in Germany, who led the new study. “Our work shows there may be cracks in that pillar.”

Astronomers generally agree that after the Big Bang, the cosmos has continuously expanded. A commonly analogy is that this expansion is like a baking loaf of raisin bread. As the bread bakes, the raisins (which represent cosmic objects like galaxies and galaxy clusters) all move away from one another as the entire loaf (representing space) expands. With an even mix the expansion should be uniform in all directions, as it should be with an isotropic universe. But these new results may not fit that picture.

“Based on our cluster observations we may have found differences in how fast the universe is expanding depending on which way we looked,” said co-author Gerrit Schellenberger of the Center for Astrophysics | Harvard & Smithsonian (CfA) in Cambridge, Massachusetts. “This would contradict one of the most basic underlying assumptions we use in cosmology today.”

Scientists have previously conducted many tests of whether the universe is the same in all directions. These included using optical observations of exploded stars and infrared studies of galaxies. Some of these previous efforts have produced possible evidence that the universe is not isotropic, and some have not.

Once they estimated the X-ray luminosities of their clusters using this technique, scientists then calculated luminosities using a different method that does depend on cosmological quantities, including the universe’s expansion speed. The results gave the researchers apparent expansion speeds across the whole sky – revealing that the universe appears to be moving away from us faster in some directions than others.

The team also compared this work with studies from other groups that have found indications of a lack of isotropy using different techniques. They found good agreement on the direction of the lowest expansion rate.

The authors of this new study came up with two possible explanations for their results that involve cosmology. One of these explanations is that large groups of galaxy clusters might be moving together, but not because of cosmic expansion. For example, it is possible some nearby clusters are being pulled in the same direction by the gravity of groups of other galaxy clusters. If the motion is rapid enough it could lead to errors in estimating the luminosities of the clusters.

These sorts of correlated motions would give the appearance of different expansion rates in different directions. Astronomers have seen similar effects with relatively nearby galaxies, at distances typically less than 850 million light years, where mutual gravitational attraction is known to control the motion of objects. However, scientists expected the expansion of the universe to dominate the motion of clusters across larger distances, up to the 5 billion light years probed in this new study.

“This would be like if the yeast in the bread isn’t evenly mixed, causing it to expand faster in some places than in others,” said co-author Thomas Reiprich, also of the University of Bonn. “It would be remarkable if dark energy were found to have different strengths in different parts of the universe. However, much more evidence would be needed to rule out other explanations and make a convincing case.”

Either of these two cosmological explanations would have significant consequences. Many studies in cosmology, including X-ray studies of galaxy clusters, assume that the universe is isotropic and that correlated motions are negligible compared to the cosmic expansion at the distances probed here.

A paper describing these results will appear in the April 2020 issue of the journal Astronomy and Astrophysics and is available online.