Russia Says It Will Keep Source of Hole (and Air Leak) on Soyuz Secret— But NASA Wants to Know: Report 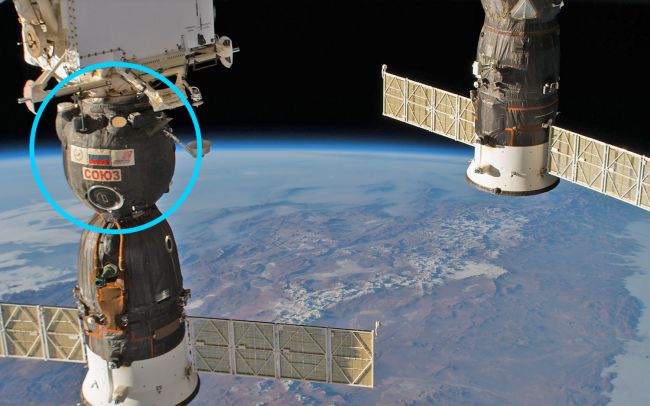 Amid reports that the Russians will keep the cause of an air leak discovered at the International Space Station in 2018 secret, NASA Administrator Jim Bridenstine has promised to speak personally with the head of the Russian space agency.

“They have not told me anything,” Bridenstine said during a Houston energy conference question session Thursday (Sept. 19), according to the Houston Chronicle. But he emphasized that he wants to keep good relations with the Russians, one of the two chief partners on the orbiting complex.

“I don’t want to let one item set [the relationship] back, but it is clearly not acceptable that there are holes in the International Space Station,” he said, referring to the 2-millimeter (0.08 inches) hole that the Expedition 56 crew found in the Soyuz MS-09 spacecraft, a crew vehicle that was docked to the station.

Bridenstine’s comments came in the wake of a report by Russia’s state-run international news agency RIA Novosti, in which Dmitry Rogozin, head of Roscosmos (the Russian space agency), suggested his agency found what created the hole last year, but would not disclose the results outside of Roscosmos.

“What happened is clear to us, but we won’t tell you anything,” Rogozin said at a meeting with participants at a science conference, according to a computer-translated page from RIA Novosti’s Russian-language report on Wednesday (Sept. 18).

After NASA reported a slow drop in cabin pressure at the station on Aug. 29, 2018, the crew of Expedition 56 located the cause of the air leak in the orbital compartment of the Soyuz MS-09 spacecraft, nearly three months after the vessel arrived at the International Space Station with three new crewmembers on board.

The astronauts plugged the hole using epoxy, gauze and heavy-duty tape, and the Russians launched an investigation. In the first few weeks, Roscosmos director Dmitry Rogozin first speculated that a micrometeoroid might have punched the hole, then suggested the hole could have been drilled by a human either accidentally or deliberately.

NASA and Roscosmos, however, issued a joint statement in mid-September 2018 after the two agency chiefs spoke by phone. The agencies “agreed on deferring any preliminary conclusions and providing any explanations until the final investigation has been completed,” Roscosmos and NASA said in their statement.

Roscosmos is currently the only agency capable of launching crew members to space since NASA retired the space shuttle in 2011. NASA is readying American commercial crew vehicles from Boeing and SpaceX and expects to start running crewed test flights as early as this year. But for now, the Soyuz is the only way astronauts can fly to and from the International Space Station.

The two agencies are the chief partners on the space station, and have been working together to build and maintain the 21-year-old orbiting complex since the early 1990s. Bridenstine and other NASA officials have thus repeatedly emphasized the level of trust between their agency and Roscosmos, which includes several missions before ISS. NASA and the Soviet Union ran a joint mission in 1975 called Apollo-Soyuz, and the new Russian nation partnered with NASA for shuttle flights to the space station Mir between 1994 and 1998.

4 thoughts on “Russia Says It Will Keep Source of Hole (and Air Leak) on Soyuz Secret— But NASA Wants to Know: Report”