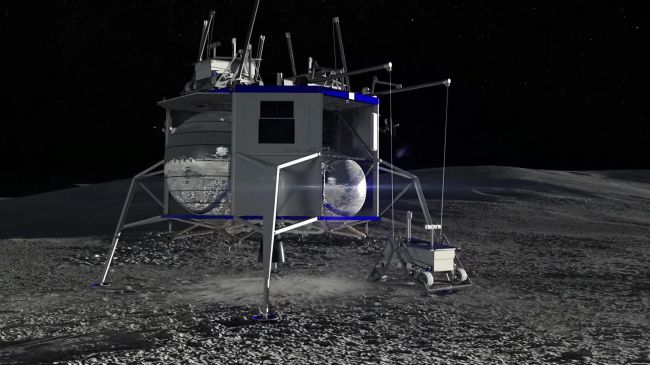 Blue Moon is a relatively large lunar lander that’s designed to deliver science payloads, moon rovers and even astronauts to the lunar surface. It can also deploy small satellites into lunar orbit as a “bonus mission” on the way, Bezos said.

Blue Moon bears some resemblance to NASA’s old Apollo lunar modules, but there are some noticeable differences. The most obvious, aside from its sleeker design, is the enormous, spherical fuel tank with the words “Blue Moon” printed in big, blue letters on its side.

Whereas the Apollo landers were designed specifically for human missions to the lunar surface — and, therefore, required human hands to deploy science payloads — Blue Moon is a fully autonomous, robotic spacecraft with built-in mechanisms for dropping off science gear, including lunar rovers. Using a crane-like contraption known as a davit system, the lander will gently lower payloads from its main deck to the lunar surface. The davit system can be customized for different types of payloads, and it can drop up to four large rovers onto the moon simultaneously.

Other bells and whistles include a star tracker system and a flash lidar device that will allow the spacecraft to navigate autonomously by looking at stars in space and features on the lunar surface.

Now that we have mapped the entire moon in great detail, we can use those preexisting maps to tell the system what it should be looking for in terms of craters and other features, and it navigates relative to that. It uses the actual terrain of the moon as guideposts.

The lander will utilize Blue Origin’s new BE-7 engines, which the company will begin testing this summer.
Those new engines will be powered by a combination of liquid hydrogen (LH2) and liquid oxygen (LOX).

Although the Blue Moon lunar lander is designed to make one-way trips to the moon, the stretched variant with its ascent stage would enable round trips for astronauts. Once astronauts  left the surface, they could, hypothetically, return to NASA’s Lunar Orbital Platform-Gateway, a proposed lunar space station that would orbit the moon, although Bezos did not elaborate on where the Blue Moon crewmembers might go once they left the moon.

NASA aims to have some form of its lunar gateway in orbit within the next five years, because the agency won’t be able to fulfill the Trump administration’s ambitious request to land astronauts on the moon in 2024 without that critical piece of infrastructure.